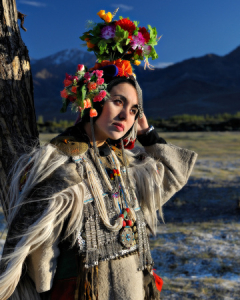 In the high altitudes of Ladak there lives a community for the past 2000 years which is believed by historians to be the only authentic Indo Aryan tribe left in India. These ancient Indo Aryan descendants are known as the Drokpa tribe, meaning ‘white skin’ in Ladakhi language. These people are distinctly different in their appearance, culture, language and religious beliefs from the rest of the Tibeto-Burman community of Ladakh and they have preserved the purity of their race down the centuries.
The Drokpa also known as the Dard tribe are scattered over 5 villages to the south west of Leh and these villages are characterized by picturesque locations, lush green valleys, temperate climate and rich agricultural produce such as best quality apples, apricots, walnuts, grapes which bring income to the Drokpa people. The Dropkas are an agrarian and vegetarian society.
These Indo Aryan villages are Kaltse, Domkhar, Skurbuchan, Achinathang and Dha and Hanu. Of all these villages only Dha and Hanu are open to tourists and they are famed as the “Land of the Aryans”. Apart from tourists these villages are also important for the anthropologists. Dha and Hanu lie 163 km south west of Leh and are the meeting point of the Indus and Shyok Rivers in Kargil region.
With respect to the origin of the Drokpas, there are two lines of thought. One theory is that the original Drokpas were the descendants of the Greek soldiers of Alexander, the Great, who lost their way after being defeated by Porus in 326BC and settled in the lush green valleys of Ladakh. The other theory postulates that the Dards are the descendants of a Aryan culture that many centuries ago came from the Hindukush mountains in Gilgit Baltistan (now in Pakistan) and settled in Ladakh.
Whichever story is true the Drokpas or the Dards definitely have distinctive Aryan features. They are fair skinned, tall, with big light coloured eyes, brown hair, distinctive noses and eyebrows. They do not marry into other communities so that the purity of their race is maintained. As a result there are approximately only 2000 Dropka people left in Ladakh. 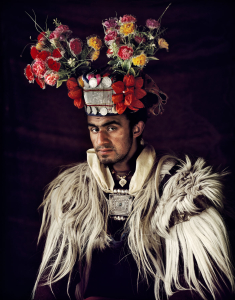 Apart from their different looks from the rest of the people of Ladakh, their dressing style is also different. Men and women wear beautiful flower and bead decorations in their headdress and the women of the region have gained popularity as the “Flower women of Ladakh”. Even their social and cultural practices differ from Ladak. Polyandry is practiced and wife swapping is common. The Drokpas for centuries have not cared for rules of “so called” civilized society. For instance, public kissing is acceptable. However, they have been forced to restrict themselves at least in front of tourist. The Drokpas are a simple and carefree society. The people are fond of music, dance, drinking, dressing up and during the Banano festival in summer men and women gather and sing and dance for 3 nights in a row! While Buddism is followed in Ladakh, the Dropkas follow Bon religion and Animism and have preserved their rituals and customs for ages.
The best time to visit these beautiful villages with the ancient Aryans is between the months of June and October when the temperatures are neither too high nor low.