Home/Blog/First Under Water Museum in Europe
­

Have you ever experienced a park which is surrounded by water and only water? A park, where there are a crowds of figures, unmistakably human, and motionless under water. There is such a park which is one of its kind – The first ever underwater Museum in Europe, located near Spain’s Canary Islands in Lanzarote. Like Singapore, Brisbane and Dubai are famous for Underwater Zoo, the Canary Islands hosted in February 2016 Europe’s first ever underwater contemporary art museum in the Atlantic Ocean. 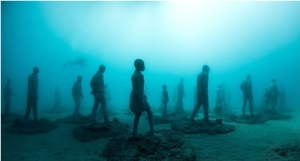 The British sculptor, painter, diver Jason deCaires Taylor submerged cement sculptures 14m beneath the surface of the sea on the seabed off Las Coloradas Beach, near the popular resort of Playa Blanca.

One can expect to see in this museum Taylor’s Raft of Lampedusa – a sculpted boat carrying 13 refugees. Other installations include a faceless couple taking a selfie, people glued to their phones, others wielding an iPad or pointing cameras. Everyone – the boat and its passengers, the “Instagram generation” – are seen heading towards a wall, the entrance to a city and the point of no return. Further, a human botanical garden – fantastical hybrids of people and plants drawn from the flora and fauna of Lanzarote is also in the cards. With plans for an underwater fountain, lighting and a giant mirror reflecting a “pool” in the sea, Taylor is clearly aiming for something epic with this thought-provoking journey.

Taylor’s first underwater installation was in 2006, when he placed a ring of beautifully sculpted schoolchildren, on the edge of an ocean shelf, in Molinière Bay, Grenada. That work was instrumental in creating a protected marine park and is now listed as one of National Geographic’s 25 wonders of the world.

This most recent art work of Taylor aims to create a large scale artificial reef to aggregate local fish species and also raise awareness to current threats facing the world’s oceans and the global community. According to Taylor the “amazing seascapes” will provide a “gateway to the Atlantic and encourage people to love the planet more through an understanding of marine life”. The purpose of the cement artworks is designed to attract plant life and colonies of sea creatures. Visitors can view the sculptures and the sea life around it from a submarine or a glass-bottomed boat, or swim and snorkel around the sculptures, an exciting and once in a lifetime experience!!!!!