When the rest of India reels under the extensive heat of the summer months or the heavy rainfall of the monsoon season, Ladakh is the perfect getaway from the oppressive heat of the plains. Situated at more than 3,000 meters above sea level it is located about 600 or more km north from the capital of India, New Delhi, in the state of Jammu and Kashmir. It is one of the world’s highest inhabited plateaus. Known popularly as India’s Little Tibet, Ladakh is also known as a Moon Land due to its outlandish landscape of vast barren mountains, the bluest of skies, and beautiful turquoise lakes that change colour as day progresses.
Ladakh a land of jagged peaks and barren landscapes, a cold mountain desert is alluring and awe-inspiring. Hidden behind the harsh and forbidden façade is an ancient civilization of Buddhist simplicity. The unique culture of Ladakh, the towering monasteries and the beautiful people allure people to this land in plenty. Besides the beauty and mysticism of Ladakh, it also has a lot of adrenalin rush for the adventurous lot. It is after all the highest adventure playground for various trekking routes, scaling up peaks that are more than 6000 meters above sea level and rafting on the most challenging rivers. All this and more makes Ladakh more than just a leisure trip.
The Great Indus River flows through Ladakh and the province is divided into Leh (Capital), Nubra, Zanskar, Lower Ladakh and Rupshu. It receives approximately only 50mm of rainfall annually which makes it a cold and dry place. Winter is long, bitterly cold and the landscape gets frozen but gorgeous. Summers are short and hot with melted glaciers. In September, The Ladakh Festival is celebrated in Leh which sees an influx of tourists. The festival showcases the traditional dances, sporting skills and handicrafts of the local people with a lot of pomp and fan fare. Ladakh offers excellent opportunities for adventure sports. The 26 km stretch from Phey to Nimo in the Indus river is the highest river rafting experience one can have. Ladak’s high altitude mountains make it an ideal location for paragliding, mountaineering, and skiing.
While visiting Ladakh one must make a trip through the highest motorable road in the world – the Khardung La Pass, 18,348 feet – to the high altitude breathtakingly beautiful Nubra Valley perched at a height of 10,000 feet above sea level. At a distance of 150 km from Leh arrives the Nubra Valley, a Y shaped valley drained by the Nubra River and the Shyok River. The Valley separates the mountains of Ladakh and the Karakoram mountain range. The Siachen glacier melts into the Nubra river. Siachen is the world’s highest battlefield. The western part of the valley borders on Baltistan, in Pakistan Occupied Kaskmir.
The ancient silk route to Central Asia passes through the Nubra Valley. The Mongols from Central Asia are believed to have brought the Bactrian Camel, the two humped camel to India. These bactrian camels are only found in Nubra Valley in India.
The main road access to the valley is through the Khardung La Pass which is 39 km from Leh. Inner Line Permit is required for visiting Nubra. The pass is of strategic importance as it is used to carry supplies to the Siachen battlefield. The roads are fully tarred up to an altitude of 16,000 feet beyond which they become rough due to snow and landslides. But the views are breathtakingly beautiful!

The main attractions of the Nubra Valley are the Bactrian Camels of Hunder, The Khardung La Pass, the Diskit and Samstaling monasteries, and the hot springs of Panamik.
Diskit is the headquarters of the Nubra Valley and the town is dominated by the huge 14th century monastery which is the oldest and largest in the valley. It houses the remains of a respected 14th century lama from Nubra who returned from Tibet after serving as regent to the first Dalai Lama at Tashilhunpo Monastery in Tibet. The monastery has been a very sacred place since centuries.
On the opposite hill lies the landmark of the valley – the impressive 32-metre statue of the Buddha Maitreya. It took four years to complete and was inaugurated by the Dalai Lama on 24th July 2010
Hunder is a beautiful town, about 7 km away from Diskit. It was the capital of the erstwhile Nubra kingdom in the 17th century. Between Diskit and Hunder lie several kilometres of massive white sand dunes that are popular for Bactrian Camel Safari.

Beyond Hunder are many small and beautiful towns such as Turtuk, Tyakshi, Thang, Chalunka, Sumur and Panamik. The villagers of the Balti towns have fair skin, blue eyes and auburn hair and are believed to be the descendants of the soldiers of Alexander the Great. Some also believe that their ancestors were Greek tribes that came in search of Jesus Christ’s Tomb and who eventually settled here. Most of these places were under Pakistan till 1971. Turtuk was opened to tourists only in 2011.

Panamik is the last village in India beyond which is the Siachen battlefield. It is supposed to have hot spring with therapeutic qualities but most tourists come back disappointed with the condition of these springs. . It is easy to spot Pashmina goats here and the village also serves as the base camp for trekking expedition to the 250 year old ENSA GOMPA. 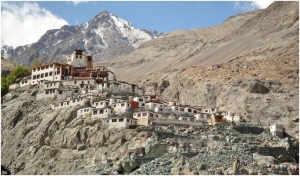 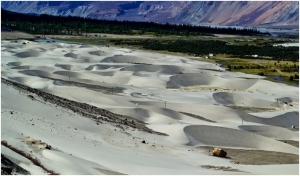 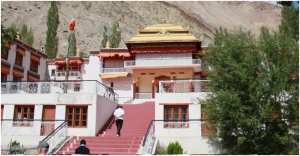 On the way to Panamik village, you will come across a white structure with a tint of traditional gold and red orchard that makes it easily visible from a distance. It is Samstanling Monastery, believed to be the main Gompa of the valley. The path to the Gompa is equally eye-catching with bushes full of berries and Tibetan prayer flags welcoming you. The monastery was originally founded in 1841 by Lama Tsultim Nyima and presently 50 monks reside in it.
Yarab Tso Lake – The Virgin Beauty of Nubra Valley

Yarab Tso holy lake is situated close to Sumur village. The picturesque setting of the lake is enough to win the hearts of the visitors. 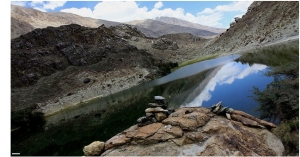 NUBRA VALLEY TREK is one of the foremost trekking expeditions in Ladakh that every hard-core trekker wants to experience once in a lifetime. Freezing conditions, strong winds, rocky mountainsides and the passes put all your mental strength and physical stamina on test. And that’s why Nubra Valley Trek is not everybody’s cup of tea.
During this trekking expedition, trekkers will come across various interesting places like Diskit Monastery, Khardung La, Khardung Village, Hunder Village and Khalser. While trekking, explorers can also enjoy Bactrian camel safaris.

How to Reach
Nubra Valley can be easily accessed from Leh, the capital town of Ladakh, via Khardung La. But special permits are required for tourists to enter the valley and the permit is valid for a maximum period of seven days only. Tourists and trekkers need to hand over photocopies of the permit on both the sides of Khardung La and also at the checkpoint by the bridge to Sumur. Tourists can reach the capital town Leh easily by any mode of transportation. For better convenience, the town has its own domestic airport that is well connected with all major cities of India.