India hides many secrets and mysteries. It has always been the spiritual capital of the world – a light of hope when the whole world staggers in darkness. At the tip of this incredible iceberg of wealth a few mysteries give themselves away. Let’s look at a few. 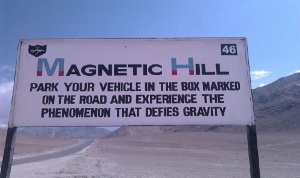 1. Magnetic Hill pulls cars up
The magnetic hill of Leh, Ladakh at an altitude of 11,000 feet above sea level pulls cars up the hill with their ignition turned off. This exciting phenomenon is supposed to be an optical illusion resulting from the hill’s gravitational pull. 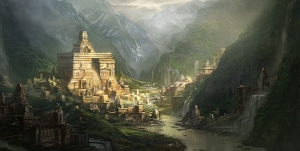 2. Mysterious Shangri La – A City of Immortal Beings
There is a divine city known by varied names – Gyanganj, Shambala, Siddhashram or Shangri-La- of immortal beings nestled within the snow capped mountains of the Mighty Himalayas. It is believed that this place hides from sight and modern mapping technologies, by camouflaging itself. It might also exist in a different dimension altogether. Only saints and sages are able to access this sacred magical dimension. These highly evolved immortal beings of Shangri La in some major ways influence the proceedings of the world and safeguard many spiritual secrets. 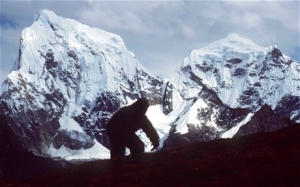 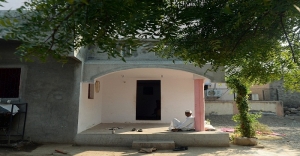 4. Shani Shingnapur – a town with no doors
In Shani Shingnapur very close to the holy city of Shirdi in Maharashtra is famous for the Shani Temple. The strange thing here is that all houses, buildings, schools are devoid of doors. Yet, there are no thefts or crime! Lord Shani is the reigning monarch here and people believe that he protects the town and ensures zero crime. 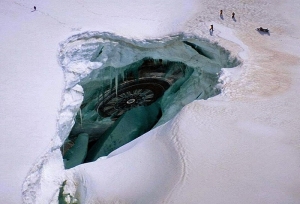 6. Kongka La Pass in Ladakh – Alien sightings
Kongka LaPass 16,970 feet above sea level is the least accessible place in India. It lies in the disputed territory between India and China. 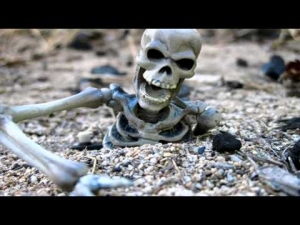 7. Roopkund Lake at Chamoli, Uttarakhand – skeletons beneath the ice
Roopkund Lake, a glacier lake at a stunning height of 16,500 feet in the lap of snow capped Himalayas is a dangerously remote location. What is inside the frozen lake is even more scary. Every year when the ice melts the frozen lake displays 300-600 skeletons beneath its surface! Radiocarbon tests and forensics date the corpses back to the 15th century AD. The locals believe that the corpses belong to the then king and queen of Kanauj, who on their way on a pilgrimage accidentally plunged into the lake due to a severe hailstorm and died. 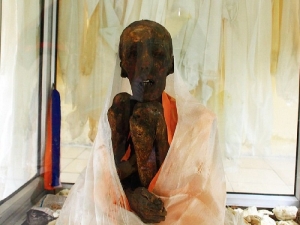 8. 500 year old mummy in sitting position with hair and skin – Spiti Valley
In an quaint little village named Gue in Spiti Valley, Himachal Pradesh, there is a natural mummy of a 500 year old Tibetan Buddhist Monk, Sangha Tenzing , in a temple. The mummy was discovered after an earthquake in 1975. The mummy has a sitting posture with well preserved skin and hair. This remarkable preservation is a result of the natural mummification procedure. The monk is believed to have started mummifying himself while he was alive. Natural mummification, as compared to chemical enbalming, is a complex procedure and is extremely rare. 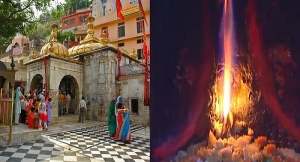 9. A sacred Flame that has been burning for many hundreds of years – Jwala Ji Temple, Kangra
Jwala Ji Temple in Kangra Valley is the holy shrine of Goddess Sati. Her fiery tongue is supposed to have dropped at this spot while Lord Shiva carried her burnt body on his shoulder doing the Tandav Nritya in anger and sorrow. (Lord Shiva’s wife, Sati, immolated herself in anguish when her father disrespected her husband. A furious Shiva danced the Tandav Nritya carrying the burnt corpse. In doing so, she fell into 51 parts and landed on the earth. Each of these locations turned into a religious shrine for the Hindus.) In the center of the temple there is a flame that has been burning for centuries. Mughal King Akbar was intrigued by this flame and tested its validity. He finally believed its holiness after eliminating all probable possible explanations.

10. Kodinhi, Kerela, the town of Twins!
Kodinhi meaning “village of twin” strangely witnesses a large number of twin birth, in all 200 pair of twins. Further, the women of the village who marry outside the village also give birth to twins. Doctors believe that the reason for this strange phenomenon lies in the chemicals of the water in the area.

11. Jatinga, Assam – mass bird suicide
Every year during dark and foggy nights in Septenber and October, Jatinga, a small village in Assam experiences a strange phenomenon. Migratory birds at night time crash into buildingst, trees, poles and fall dead on the ground in huge numbers. Ornithologists say that the dense fog and high altitude daze birds because of which they end up crashing into trees and buildings. However, there are many arguments that counter this theory. 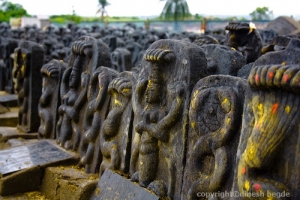 12. Shetpal, Maharashtra – living with Cobras!
In Shetpal, Maharashtra, children play with cobras instead of toys! Snakes are worshipped in this town. It is customary for every household to have a resting place for the cobras in the rafters of their ceilings. And the strangest thing is that no snake has ever bitten any human being here! 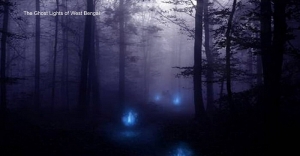 13. The Ghost Lights of West Bengal
There have been many sightings of unnatural glowing lights of different colours hovering over the marshes in West Bengal. Referred to as ‘Aleya Lights’ for many years now, these lights are a nightmare for fishermen, as they usually end up confusing them and they would lose their way. In many cases reported till date, various fishermen have even lost their lives due to these strange lights. This phenomenon remains unexplained by science. 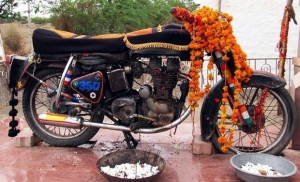 14. Bandai, Jodhpur -The Motorcycle God “ Bullet Baba”
Om Singh Rathore died when he crashed his Bullet into a tree while riding drunk. The police claimed the bike and took it to the station. The next day, the bike was found at the spot of the accident. They brought it back to the station, emptied the fuel tank and chained it. Yet the bike miraculously found its way back to accident spot the next day. The motorcycle was moved permanently to the location and the Om Baba (or Bullet Baba as it is popularly called) Shrine was erected. Every day many passers-by come to offer their prayers. The spirit of Om Banna is believed to protect travelers. 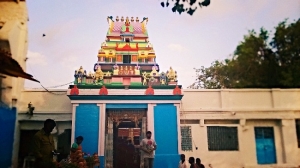 15. Balaji Temple, Chilkur, Hyderabad – Visa to US granted!
Visa Balaji Temple, is famous for ensuring Visa to US. People come here before their visa interviews to take blessings of Visa Balaji and successfully pass their interview. It is gaining a lot of popularity due to this strange phenomenon and people of all religions have started to visit the temple. When a person gets the visa, s/he must keep their vow and take 108 rounds of the inner shrine. 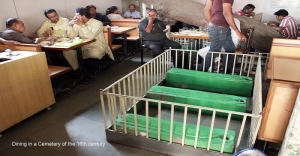 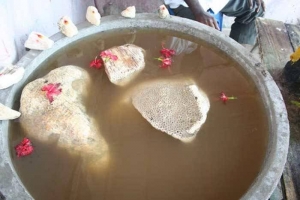 17. Dhanushkodi, Rameshwaram, Tamil Nadu – Floating stones
The Ram Sethu or the Adam’s Bridge is easily spotted by satellite image. It is a bridge between the southernmost tip of India (in Dhanushkodi) and Sri Lanka. It was built by Lord Rama’s Vaanar Sena and it still exists, evidently! The bridge is made of floating stones that lie submerged under the water. These floating stones are abundantly found in Dhanushkodi even today. This is also a proof that Ramayana is not just a story but a real occurrence.