The magnificient green lights with golden borders and hints of red and purple cover the entire night sky to play an otherworldly Light Show. How can anybody not be awe-struck with this beautiful display of Nature? The phenomenon is known as Aurora Borealis and occurs when electrically charged particles strike with the gases in the earth’s atmosphere. The Aurora Borealis can be seen anywhere in the aurora oval, i.e., the region around the magnetic poles. It is here the lights occur with the greatest intensity. In Canada the lights are viewed best in the Yukon, Nunavut and the Northwest Territories. 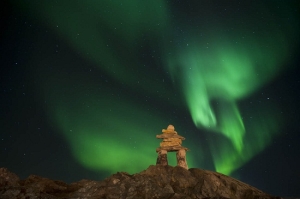 Dinosaur Provincial Park – Alberta
Did you know that Canada once hosted the Ancient Dinosaurs? And still preserves their millions of years old fossilized bones in her lap? The Dinosaur Provincial Park in Alberta is not a man made park for children as the name might suggest. It is actually a natural dinosaur graveyard, known to be the world’s largest dinosaur graveyard. Seventy-five million years ago, southern Alberta was a thriving hub of pre-historic life which included fish, amphibians, reptiles, primitive mammals and dinosaurs. When many of these animals died in river channels and mud flats, their bones were buried in layers of sand and mud and eventually fossilized. The Dinosaur Park has a fossil collection of 500 dinosaur specimen, 40 dinosaur species and 500 species of animal life.

Ellesmere Island – Nunavut
Ellesmere Island, Nunavut, in Canada’s high arctic where temperatures are always below the freezing point till today preserves stumps of trees in a fossil forest from Pre Ice Age days. About 55 million years ago, this island in Canada’s was once home to a wetland forest with palm trees, down redwoods, bald cypres and cycads, not to mention warm temperatures. And the fossilized forest still remains in bits and pieces to tell us about the earth’s upheavals, times of beauty and serenity and its survival through time.

The Canadian Rockies – Alberta, British Columbia
How can you talk about Canada without mentioning the spectacular Rockies? Vast expanse of wilderness, snowcapped mountains and turquoise blue waters is what characterizes The Rockies Mountains and Canada too. Whether you’re visiting one of its four national parks, skiing or snowboarding at world-renowned resorts or simply passing through on an unforgettable train ride, the beauty of this region is impossible to ignore. It’s no surprise most of the Canadian Rockies are designated a UNESCO World Heritage Site and draw millions of visitors every year 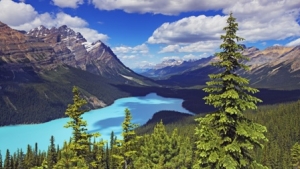 Niagara Falls – Ontario
The Niagara Falls is a spectacle to withhold – 168,000 cubic meters of water flowing over the crest every minute. ? It’s no wonder Niagara Falls, which consists of three waterfalls called the Horseshoe Falls, the American Falls and the Bridal Veil Falls, is one of the most famous places in the world. Canada shares one third of the Niagara Falls with the American border.

Algonquin Provincial Park – Ontario
With the sun poking up over a panorama of treetops, seemingly setting the skyline on fire with broad strokes of orange, and waves gently lapping against the bow of your canoe, it’s not hard to imagine why Canada’s oldest provincial park is also one of the most inspiring. It’s the place where the Group of Seven, Canada’s most famous painters, did most of their work. It’s also an escape for millions of campers, hikers and paddlers each year, trading the bustle of city-life for utter solitude in the untouched Ontario park. 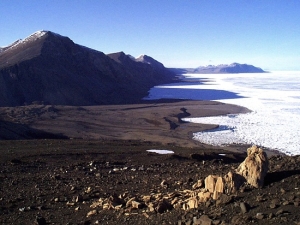 Hopewell Rocks – New Brunswick
Ever wondered what an ocean bed would look like. Here’s your chance to explore the ocean bed without any water. Every day, 100 billion tonnes of water empty out of the Bay of Fundy, allowing visitors the chance to walk along the ocean floor at Hopewell Rocks and admire bizarre rock formations like sculptures in a gallery. At high tide, the Atlantic’s water level rises by about 16 metres almost completely submerging everything again, save for the tips of some of the rocks.

Cathedral Grove – British Columbia
This old growth forest on Vancouver Island might be that place that you imagined out of fairy tales with 880 years old trees that measure as much as 9 meters in circumference. Ideal tree-hug? Just don’t expect to get your arms all the way around the trunk of an ancient Douglas fir tree. Some trees in Cathedral Grove, a cluster of the giant variety of trees in MacMillan Provincial Park, are as old as 800 years and measure as much as nine metres in circumference.