Home/Blog/KanyaKumari..The town that talks its history
­

When the beautiful rocks along with water and land live in harmony that’s when you think you are in Kanyakumari. The place is famous for the numerous beaches, temples and memorials. It is a land of the green meadows, white sands and blue water falls. Kanyakumari is located in Tamil Nadu in South India, about 700 Kms. from Chennai the capital of Tamil Nadu. 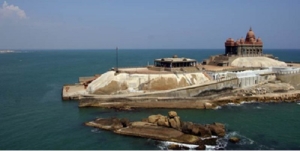 The city’s beaches are the only beaches in the world where you can experience both the sunrise and sunset. There are numerous ancient temples that attract a huge number of tourists to the city.

Let’s take a tour to the city now, the famous Vivekananda Rock Memorial is a must to experience. The memorial stands on one of the two rocks, located 100 meters from the shore. The rock is situated in the middle where the three oceans meet- The Bay of Bengal, Indian ocean, and the Arabian Sea. You can reach this spot by a ferry. The memorial was constructed in honour of Swami Vivekananda who is said to have attained enlightenment on this rock. A meditation hall is also attached to the Memorial. Tour to Kanyakumari Temple is yet another experience. The Temple is also known as Bhagvaty Amman Temple which is one of the 108 Shakti Peetha’s in Hindu mythology. This magnificent temple is situated in the coast surmounting the beach. You will find many cultural heritages of Indian people in the temple.
Along with this, there are other attractions like Kanyakumari beach, Thiruvalluvar Statue which is 133 feet tall of the Saint poet Thiruvalluvar and also the biggest in Asia, who was one of the greatest poet in India. Suchindrum- it’s a temple town where the temples are built in the distinctive Dravidian style. This holy place is located on the bank of the river Pazhayar, adjoining fertile fields and coconut groves. The word denotes Siva, Vishnu and Brahma as. Sthanu represents Siva, Mal represents Vishnu while Ayan represents Brahma i.e. Siva, Vishnu and Brahma in “One Form”.

There is Padmanabhapuram Palace- which is an old granite fortress and was constructed around 1601 AD. The fort has several important buildings like Kings council chamber, museum that contains artifacts from the older times and various weapons like swords and daggers, paintings and a plethora of wooden furniture.