Every year during the time of Mahashivratri, Khajuraho in the heart of Incredible India –Madhya Pradesh – celebrates the Indian Classical Dance forms against the backdrop of the Khajuraho temples and the Magh full moon. Spellbinding dances by renowned exponents captivate the audience. In daytime, the dancers use the stage against the mesmerizing setting of Chitragupta or Viswanatha temple on the Western front for rehearsals. It is worth a peek to watch them practice on the platform terrace before it is bathed in stage lights and moonshine by the evening. The graceful foot-work and enchanting abhinayas moving to the precise accompanists (vocals, mridangam, bansuris, sitars etc) make the evening an absolute delight. Full moon, spring breeze and the mystical temple background of the Vishwanath and ChitraguptaTemples and give the event an almost unreal feel.

It is organised by the department of culture, Govt. of Madhya Pradesh. The weeklong showcase begins just before spring at the end of February. Entry is free of charge for all patrons.

A World Heritage Site
A world Heritage Site Khajuraho has about 22 fine-grained sandstone temples in various stages of conservation. They were built by the Chandella rulers between AD 900 and AD1130. However, they came into the public eye only in 1938 when an English engineer TS Burt discovered the temples while venturing into the Bundelkhand forests inspired by legends of the Khajuraho.
It attract tourists from all over the world who come looking for India’s rich past and traditional legacies. Indeed, strolling down the corridors of these temples is a completely enchanting experience. The sculptures depict the lives of different people, from kings to courtesans, from scholars to blacksmiths.
The temples of Khajuraho are divided into three groups based on their location in the village: Western, Eastern and Southern. The western group of temples is the most visited and ornate one with octagonal ceilings and maha-mandap halls.
. 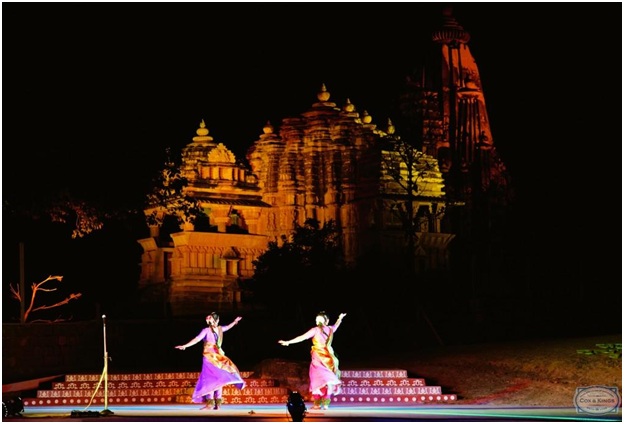 Khajuraho, The Village
Spread over 21 sq. kms., this sleepy village comes alive during the Dance Festival. The venue is situated to the west of the main road. Approximately 183 metres to the southeast is a three-storied stepped water tank, also known as ‘Chopra’.
Khajuraho is located in the gently sloping plains (almost flat-lands) of Bundelkhand. Bicycles are the best way to explore its nooks and corners. Every lane will introduce you to different delectable offerings from the local cuisine.
Quality tourism by art lovers has ensured that this part of the village is buzzing with activities and gift shops that sell gems, trinkets, handicrafts, textiles, publications, earthenware, stone and bronze sculptures, etc.
Rather rudimentary clay replicas of Khajuraho sculptures can be found all over the marketplace. State Museum of Tribal and Folk Arts has over 500 items and artifacts from all over Madhya Pradesh. Local guides proficient in French, German, Spanish and Japanese are available on a full-day or half-day basis.

The stunning ancient sculptures of the Khajuraho temple have attracted hordes of tourists since time unknown
How To Get There
Air: Khajuraho is connected with Delhi, Agra and Varanasi by daily flights within India.
Rail: Khajuraho is connected with Delhi, Jhansi (172 kms), Harpalpur (94 kms) & Mahoba (64 kms.). Satna (117 kms.) is convenient link for Mumbai, Kolkata and Varanasi.
Road: Jhansi and satna are connected to Khajuraho by regular buses and taxis, which take about 3.5 hours.

Attractions Around Khajuraho
Panna National Park: Panna is a Tiger Reserve Park and a Biosphere Reserve spread over 542.6 sq kms by the river Ken. It is barely 32 kms. away from Khajuraho and makes for a wonderful day excursion.
Kalinjar Fort is 130 kms away atop the last of the Vindhya Mountains and the ramparts of this fort have been home to many a dynasties of Bundelkhand.
Ajaygarh Fort: Ajaygarh was the erstwhile capital of the Chandella kings. The fort is 80 kms away from Khajuraho. It has a tough 250-meter climb but it is absolutely well worth the view. Stones for building the Khajuraho temples were provided from the Ajaygarh quarry. A lakes stands in its place now.